To De Novo or Not to De Novo: That is the Question

Okay, so you are convinced of one of the following based on banking changes in your market:

Any of the above scenarios could cause you to find hope in this article and the idea that de novos are making a comeback. “Maybe,” you say, “that’s exactly what I should be considering.”

If you find yourself in one of these categories and you believe that new banking blood in your market would be just what the doctor ordered, then you also need to consider how time sensitive it is to get your new bank’s doors open. While de novos are still a great option, it takes time to get a de novo approved and opened. In fact, it takes around six to nine months to get your regulatory approvals even assuming you hire a good consulting firm to help you prepare the applications. Furthermore, when your new bank does open, it will likely take at least 18–24 months to become profitable. I realize this all seems a little negative and I certainly don’t want to be known as Dr. No. To be fair though, you need to know what other options are available to you and your prospective investor group.

Any of the above scenarios could cause you to find hope in this article and the idea that de novos are making a comeback. “Maybe,” you say, “that’s exactly what I should be considering.”

The following table indicates the trend in de novo charters from 2002 through 2019. 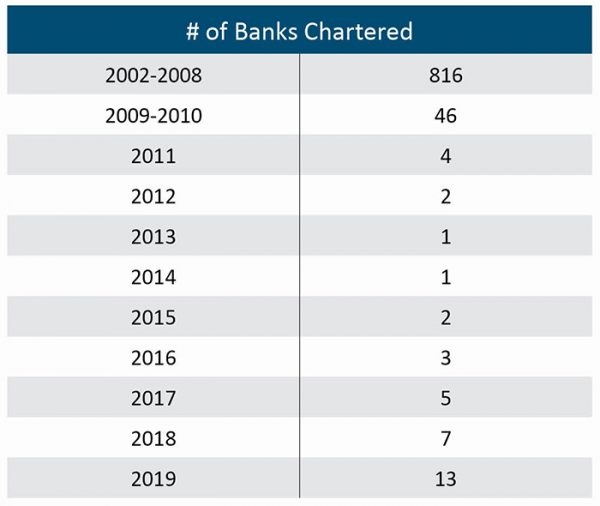 During this timeframe, though, an interesting trend emerged. Individuals or investor groups who had the de novo bug or who had an innovative banking concept that needed a bank began to look at another option. In fact, there was (and still is) a very good option which most banking regulators heartily endorse.

One of the major concerns in the American banking system is the rapid graying of our bankers, whom I will affectionately refer to as baby boomer bankers. Along with our aging baby boomer bank officers comes a healthy dose of aging directors and even older owners or shareholders. Sprinkle into the mix an economic downturn, oversalted with increasingly expensive regulations and you have just created a toxic stew that is the basis for a nightmare on Elm Street (or, more correctly, Main Street). What will we do about the lack of succession at all levels of community banking?

The answer? An “almost de novo.” Or, as I’ve dubbed them, “Repurposed Charters.”

Now, you ask, what exactly do I mean by “almost?” Specifically, I mean a small bank under $50 million in assets. Out of the 5,068 remaining banks in the U.S., 467 (9.22%) are under $50 million in assets. If your ambition and capital resources are a little higher, then you have just increased your target potential by 158% by adding another 736 banks between $50 and $100 million. That amounts to 14.52% of the banks in the U.S. Combined, we are talking about a pool of potential banks that represents 24% of all the banks in the U.S. Now, that, as my daddy would have said, is a pond worth fishing in. The following table presents the number of banks under $50 and $100 million in Bankers Digest’s circulation area. 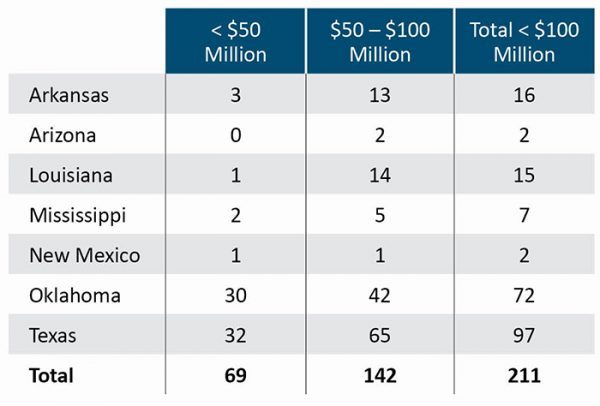 In thinking about small banks like those presented above, experience tells us several things.

1. Some of these banks are perfectly happy with the status quo—earnings are good and the reality of their size limitations has not yet set in.

2. Some of these banks are concerned about how to survive in the future, but have not focused on what to do or when to do it.

3. Some of these banks have run out of gas (and young bankers, owners, customers, etc.) and are truly desperate to get out of town before the bottom falls out.

In time, we believe that almost all small banks will have to consider their strategic options because of size and the increasing expense of compliance and security. Most observers think that survival requires at least $500 million to $1 billion in assets to have the scale to profitably cope with the upcoming changes in demographics and technology. In the meantime, though, figuring out which banks are in the second or third bucket and willing to consider a sale, can seem like a huge hurdle or challenge.

Since I was a hurdler in college, it’s safe to say that I like hurdles. So for the sake of this article, let’s just assume that we clear a major hurdle and identify a few small banks that are willing to sell – an outcome borne out many times in my professional experience. If one such bank can be found, why then should you consider this as a viable option?

We understand that an existing bank might not fit every potential de novo banker’s business model. However, there are a number of compelling reasons to at least consider it as a viable alternative.

1. Buying an existing small bank can be much faster than chartering a new bank – 60 to 90 days compared to six to nine months.

2. The price of a new bank, especially one in a rural area, is relatively modest, so you should not pay for a large amount of blue sky or create a lot of goodwill on your balance sheet. The premium paid would roughly equal the cost of organizing a new bank plus the operating losses for the first 18 months.

3. Existing banks are usually already profitable, so there is no 18 month start-up loss period.

4. An operating bank already has a “back office,” complete with a technology provider and an existing team of people who are operating the bank.

5. Location is not an issue. A bank that is located in a rural area of the state can be moved. As part of your acquisition, you can branch or relocate the headquarters to the market you want to serve. Of course, care must be taken to continue serving the bank’s existing market area.

6. Most rural banks have low loan to deposit ratios, so they have ready funds to lend, allowing you to execute your business plan more quickly. Since building deposits and liquidity is a major problem for new banks, existing banks usually have a viable market presence and a proven ability to generate deposits for you to lend in other markets in the future. In fact, the cost of funds in a rural market is usually significantly lower than the cost at a metropolitan bank.

Although my cat-loving mother-in-law hates it, most of us have heard and maybe even quoted the Mark Twain idiom “there is more than one way to skin a cat.” Of course, when it comes to cats, none of the outcomes are favored by the cat kingdom or my mother-in-law. However, in talking about banking, it makes a great point in that there is always more than one way to accomplish a desired result.

If your desired outcome is to open a new bank in your market, you should consider the option of short-cutting the de novo process by acquiring a small bank. In fact, since some of the de novo and acquisition steps are identical, pursuing both avenues at the same time (up to a certain point) can ensure that you will not be guilty of trying to leap across a chasm in two jumps. That, my friends, is one of the most dangerous, and expensive, places you can find yourself in.

To De Novo or Not to De Novo: The Podcast

De Novos are Back, Get Ready for More: Podcast

The Return of the De Novo